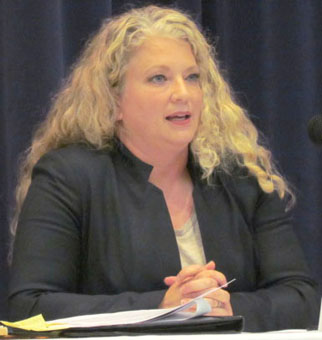 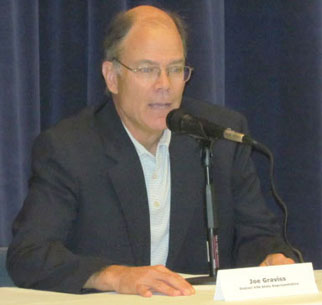 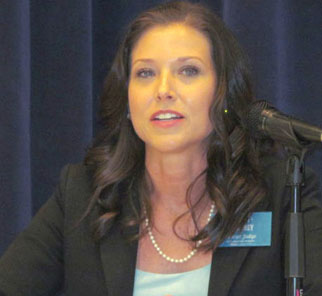 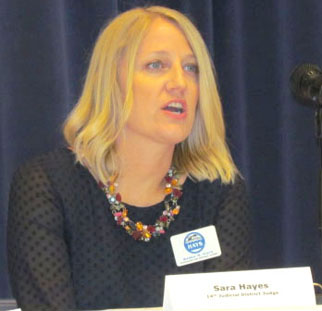 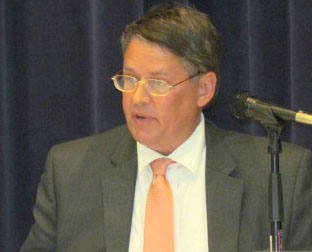 The first race featured in the forum, which took place in the auditorium in the school’s Anne Hart-Raymond Building, featured just one contestant for the 56th state House seat – Democrat Joe Graviss. Republican Dan Fister did not attend, so Graviss had the stage to himself. Graviss and Fister are competing for the seat left vacant when State Rep. James Kay chose to run for Woodford Judge-Executive, for which he is unopposed.

Graviss, who owned nine area McDonald’s with 650 employees before selling them late last year, said he was running to continue his record of service to the community. He said he was tired of the dysfunction and partisanship in Frankfort. “There’s just an extreme amount of dysfunction, and people are sick and tired of the political gamesmanship and warfare and ego battles that are going on in Frankfort. I think they just want their elected officials to be honest and to work hard solving problems, not worry about destroying the opposition or getting reelected,” Graviss said.

He said he’s done a great deal of research into the issues and that the people he’s spoken with since he launched his campaign are concerned about health care, education, and getting enough workers for jobs.

Asked about the greatest challenges and opportunities in the 56th District, Graviss returned to the issue of dysfunction in the capitol.

He also described the opioid problem and education, health care and pensions as major challenges that won’t be addressed if elected officials continue to engage in overly partisan behavior.

Asked whether the state government had a role in trying to help curb the rising cost of college tuition and the debt many graduates face, Graviss said he was a former member of the state Council on Post- Secondary Education. “It was extremely clear… for every dollar the state decreased (in support of higher education), these schools were making it up in tuition, and those are just indirect taxes on our people,” Graviss said. He said while schools need to “look hard” at administrative and other non-teaching spending, state funding was drying up.

“And it’s all about an effort to make government smaller so you can take it to a bathroom and drown it. And I just do not think that is the right attitude, outlook or approach to this,” Graviss said.

Asked about charter schools, Graviss said he’d studied the matter and believed that the state’s public schools desperately need more funding, and that teachers need higher pay and more professional development. Charter schools, he said, are not a proven “silver bullet” and would take money away from public school systems.

Asked how to better recruit and retain good teachers, Graviss cited better funding, more secure schools and tax reform. “We need to look at our tax reform and understand that we give away more in tax breaks and loopholes than we take in in revenue,” adding that some tax breaks don’t serve a purpose and are given to people who don’t need them.

Sarah Hays of Woodford County and Kelli Kearney of Scott County are competing for the judicial seat that will be vacant when District Judge Vanessa Dickson retires at the end of the year.

Hays said she was a Woodford County native and that both of her daughters attend schools here. After graduating from the University of Kentucky College of Law, she practiced in general civil litigation for a Lexington law firm. She then took a position with the state Court of Appeals, working for Judge James Lambert, where for eight years she reviewed cases and trial court decisions “from all over the state …”

She’s currently working for the Lexington law firm of Miller, Edwards and Rambicure, practicing in family law, criminal defense and appellate matters. Her community involvement includes membership on the site-based decision-making council for Woodford County Middle School, other school volunteer work and pro bono work for Legal Aid of the Bluegrass. She said she’d always wanted to be a judge.

Kearney has been an assistant county attorney in Scott County for nearly five years. Before that, she worked in the state attorney general’s office, where she was a prosecutor in the Medicaid Fraud division. Other jobs included a stint as a clerk for Circuit Judge Paul Isaacs and a victim’s advocate for the Fayette County Sheriff’s Department and the Fayette Commonwealth Attorney’s Office. She said her victim’s advocate work inspired her to go to law school and become a prosecutor, and that she decided to run for district judge when Dickson told her she was retiring. “I felt like it was important for the citizens to have a judge who’s truly committed to serve in the community and has the experience in District Court that a district court judge needs,” Kearney said.

What are the responsibilities of a district judge?

Kearney said a district judge needs to be fair and apply the law evenly, consistently and without bias. Many of the defendants in a district court, which include misdemeanor, traffic and probate court cases, are without representation. “They’re there in a time of crisis, so I think it’s important for them to have a judge that’s used to dealing with those people and those types of situations when they don’t necessarily have counsel there to advocate for them. It’s important for a judge to make sure that their rights are looked out for…” Kearney said.

Hays said all judges must have integrity and show respect for everyone in the courtroom, be they litigants, victims, defendants, attorneys or members of law enforcement. “A good judge, I also think, keeps an open mind, because no two cases are alike, and I believe a district court judge has to have the right temperament to manage a lot of litigants who will be unrepresented, to advise them of the opportunities and services that might be available to them…” Hays said. She said her work for the Court of Appeals allowed her to review the work of district and other judges across the state.

Do you feel the way we’re currently handling drug cases through the court system… is effective?

Hays said the drug and opioid epidemic will be the biggest issue facing Kentucky courts for at least the next five years. “And people that are dealing with addiction are more often… perpetrators of crime. It’s resulted in an increase… especially in Scott County, the biggest county of District 14… in the number of cases in District Court and Circuit Court,” Hays said. She said the Woodford County District Drug Court program should also expand to the two other counties in the district, Scott and Bourbon. Benefits of drug courts include helping drug-addicted expectant mothers have healthier babies and encouraging rehabilitation, she said.

Kearney said she sees a lot of drug, theft and burglary cases on the Scott County docket and that many of them are related to drug addictions. “From what I see, drug court requires a guilty plea. Most of the drug cases that I see that would be appropriate for drug court… Most of those cases are felony charges. Marijuana, typically, is the only misdemeanor drug that we see in District Court predominantly, and that … would not be a drug court case,” Kearney said. She said while Woodford County has a drug court, it does not have a probation agency to keep track of such cases. “It’s going to take coordination with drug court and prosecutors and defense attorneys…” she said.

Sharon Muse and Keith Eardley, both of Georgetown, are competing for Commonwealth’s Attorney, as incumbent Gordie Shaw chose to not seek reelection.

Muse said while she’s not an elected official, she’s advanced cases in district and circuit courts and the state Court of Appeals across the state for 18 years and has never had a case reversed by the higher court. In 2006, she was kidnapped by a career criminal, who threatened her life and forced to drive across the country. “… This experience obviously changed my perspective on the criminal justice system. It made me wake up and pay attention,” she said. “It’s broken, and I certainly can’t fix the entire system, but I can make significant changes for ours.” She said since then, she’s trained with experts in crime scene management, evidence collection and threat assessment, and has created protocols for law enforcement officers to use at crime scenes.

Eardley said after graduating from the UK College of Law in 1998, he worked for the public defender’s office in Lexington for almost eight years, where he tried dozens of felonies, including murder cases. He’s worked for Shaw since 2006. “In my criminal career, I’ve handled over 4,000 criminal cases, the majority of them felonies. I’ve tried over more than a hundred criminal cases, including 15 murder trials,” Eardley said. One of the cases he helped prosecute was that of the man who attacked Muse, he said. “I’m one of the few prosecutors in Kentucky who’s both prosecuted and defended death penalty cases,” he said. “We need a Commonwealth’s Attorney who on day one can handle the serious cases…”

If elected, what policies and procedures will you maintain or implement to help victims of crimes?

Eardley said he’d begin by meeting with all victims of crime, a policy he said already exists in the Commonwealth Attorney’s office. “I always invite crime victims to come to court. Don’t just listen to what the prosecutor says. Come to court and see what happens,” he said. He said he works night and day with crime victims when their cases get ready to go to trial. “We meet. We work on their testimony. ‘This is what I’m going to be asking you at trial. Now I’m going to play defense attorney. This is what the defense attorney’s going to ask you at trial,’” Eardley said. He said he does everything possible to prepare crime victims and keep them fully notified about what’s going on.

Muse said she would do what she’s doing now – working with crime victims. “And it’s interesting, because as my opponent pointed out, he was the prosecutor in my case, and that’s what inspired me to create the procedures I have now, because I didn’t get met with. I didn’t get prepared. I prepared myself,” Muse said. She said then-Circuit Judge Rob Johnson turned down a plea agreement in her case because it was “far too low.” She said prosecutors suggested a 20-year sentence for her attacker, but she begged Johnson for a higher sentence, and the man was eventually sentenced to life. “I’ve talked to countless victims in our system (who) will tell you, ‘I never met with the prosecutor…’” Muse said.

What accomplishments in your term would lead voters to reelect you?

Muse said she’d like to have a group of community members, including law enforcement officers and victims’ advocates, to say that she’s honest, fair, and that her cases move quickly. “And to have crime victims stand up and speak and say, ‘She’s a serious advocate. She knows what it’s like.’ And I have lived with the consequences of not feeling like I have a voice, and that is difficult. And as a result of that, I’ve gotten various specific plans, very empowering plans, to work with the crime victims…” she said.

Eardley said he wanted people to say that Woodford, Scott and Bourbon counties are safe places to live, work, retire and raise a family.

Clippings from the Blue Grass Clipper

Woodford Fiscal Court discussed two proposals from the county’s garbage and recycling service contractor Tuesday, including one that would make recycling pickup every other week. The offers are from R