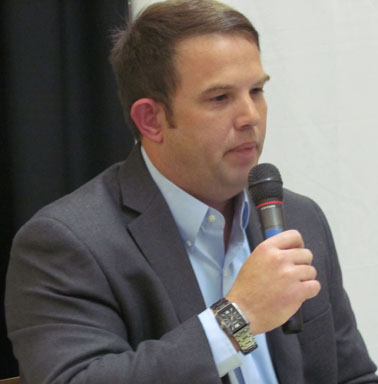 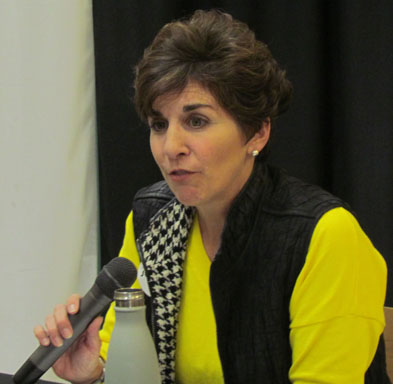 At least 100 people attended the only real debate of the campaign, politely applauding their favored candidates in the hour-long event, but otherwise listening carefully and quietly. Community Activism teacher Andy Smith said his students were approached by the two campaigns and put the event together – complete with questions – in the past three-and-a-half weeks. The event was also live-streamed.

Here’s a selection of some of the five topics discussed, the candidates’ answers, and their responses to their opponent’s answers:

Lisa Johnson described herself as an experienced, collaborative leader with a vision, whose children went to school in Versailles, where she was a member of the school’s Site Based Decision Making Council. She said she was an active volunteer at Woodford County High School when her children were attending. Some of her work with young people involves recruiting them for the Mentors and Meals non-profit she founded and runs, she said. She said on the campaign trail she’d heard of backroom deals and had seen a lack of transparency in city government – a topic she returned to several times during the meeting.

Brian Traugott said he’d lived in Versailles all his life and had the pleasure of working with the Community Activism class each year since its inception. He spoke of the March adoption by him and his wife, Laini, of their son, Liam, and how it gave him new purpose in life and as mayor. He said he was proud of the city government’s progress in areas like financial management since he became mayor, adding, “Some will try to tell you differently – some will look at a blue sky and tell you it’s raining.”

What role does transparency play in local government?

Johnson said transparency was crucial and was about more than checking the boxes. “Transparency, to me, means that minutes are taken at every (city council) committee meeting …” She said she’d tried to get minutes from the city council’s six standing committees, but couldn’t because they hadn’t been taken. She said committee meetings should be posted more than 24 hours in advance, including on the internet, and that the city’s Enterprise Fund presently includes items that should be in the General Fund, including the mayor’s salary. Meetings of the council’s standing committees should be held at least quarterly, she said.

Traugott agreed that transparency is crucial. He said committee meetings are posted well in advance of 24 hours, unless the committee chair asks for one with less notice, and city council meeting agendas are posted online Friday at noon before the next Tuesday meeting. He said part of transparency is accessibility, and that no one could say with a straight face that he had not been the most accessible public servant possible. Forming the Downtown Planning Advisory Committee (which includes citizens) and a Youth Council also showed his commitment to transparency, he said.

Johnson responded that committee meeting notices are only posted on the back door of the Versailles Municipal building and a bulletin board inside the building. She said posting and minute reforms passed by the council only came about 30 days before the election, and were likely inspired by her candidacy.

What steps should local government take to expand transparency …?

Traugott said the council had passed the ordinance Johnson referred to and that he gave the council, not Johnson, credit for that. He said next steps included live-streaming council meetings and holding regular council meetings at the new Versailles Police Department headquarters, which is scheduled to open next summer.

Johnson returned to the need to post committee meetings earlier, along with the agendas for those meetings. “These are committees that are important for our citizens to know about, and as far as I know, they are usually only attended by the three council members … in charge of them,” she said.

Traugott responded by saying he would prefer that more business be conducted in full council meetings, rather than committee meetings, in part because some of the issues referred to committees get bottled up.

As more businesses open in Versailles, the city is undergoing a time of significant growth and development. How important (are) these developments to the revitalization of downtown, and what is the role local government should play …?

Traugott said he was extremely proud of the revitalization of downtown Versailles, from the number of new businesses to sidewalks, streetlights and flowers. “You cannot artificially drive up the cost of land through zoning policies and expect a builder to come in and take a loss without a subsidy. The City of Versailles can’t afford to pay builders to build affordable housing,” he said. The mayor’s job is to create an investment where investment is welcome “and I think that environment exists,” he said.

Johnson said downtown Versailles has a great opportunity to be a destination for people to work, live, stay and play, and that the role of local government is to help downtown businesses grow. “Also, to utilize the underutilized buildings that are downtown … A lot of second- and third-floors are not being utilized,” she said. She said there are great developments and businesses, but they’re happening despite local government, not because of it. She said she’d love to see a Buy Local phone app and to have downtown merchants launch a “shop local” campaign.

Traugott responded, “If people are investing in Versailles despite me, I think that’s a pretty good endorsement. Reelect me, and they’ll keep investing …” He said he didn’t favor subsidizing people “who have more money than the entire city government to do something with assets they should be utilizing to begin with ...”

Johnson said it’s very important that the city have a good relationship with the county and have more communication. She suggested monthly meetings with the county judge-executive, Midway’s mayor and the 56th District state representative to discuss the health of the community. Other groups, like the Tourism Commission, Chamber of Commerce, Versailles Merchants Association and EDA, should meet weekly, she said. She said those groups do meet weekly in Bardstown. “I definitely feel there’s a lack of communication between all these stakeholders,” she said.

Johnson responded by saying that she’d like to see more town hall meetings. “I love the fact that there are all these people in this room tonight. It would be a great opportunity for city and county officials … to have town hall meetings more regularly – at least twice a year,” she said.

How important is it for city leaders to develop a vision for our community and use that vision to guide city progress?

Traugott said it was extremely important to have a vision and mentioned the 2014 strategic planning session held at the Kentucky Community and Technical College System (KCTCS) headquarters, which led to improvements at Big Spring Park and the proposed downtown pavilion. Referring to an earlier question, he said, “When you talk about the three things that make Versailles unique – agriculture, bourbon and equine – those are three things that don’t really have a big presence inside city limits, but we need to bring that presence here …” He mentioned the Lexington Street mural unveiled a few months ago that was funded largely by the city.

Johnson said she wanted to see Versailles named one of the top 10 small towns in America, a distinction she said has been given to Bardstown. “Versailles is not all that different from Bardstown, and with a little bit of effort, we can be the best,” she said. She said she’d been part of many plans to improve Versailles dating back to 2001, “And we do a really good job at talking, but we don’t do a really good job of implementing those plans.” She said she was a creative, action-oriented person, and would make that vision happen. “In the private sector, I won awards for being the best at what I did. In the public sector, I was given an award from a lady governor for having the most volunteerism in the state of Kentucky,” she said.

Traugott responded, “I’ll take issue with the statement. I believe we’re one of the 10 best small towns in Kentucky – in the world, for that matter, and I don’t need a bunch of corporate executives to put out a ranking and tell me that.” He said while Bardstown has a beautiful downtown, “They also snake-annexed it to build a Walmart, they have a ton more land inside their urban service boundary than we do …” Over the last few months, Versailles and Woodford County have been through a politically and socially divisive period. What role do you think the mayor and city council have in helping the community come together.

Johnson said she was the perfect person to heal the divide; that she had lived in the county and worked on a farm, though she admitted that weed-eating a fence row wasn’t a strong suit. She said her children went to school in Midway through fifth grade, and that she was impressed by the way that town has made things work. “We are one Woodford County. Yes … I would like to be your spokesperson (as mayor of Versailles) … but we also have to appreciate the other communities around us …” she said.

Traugott said the mayor and council play an extremely important rule and part of that is setting the tone for discussions. He said he’d grown greatly in that capacity. “… I’m not the one right now that’s dividing the community. You will not hear a negative word about Ms. Johnson come out of my mouth. I’ve been trashed on probably half the doorsteps in the city of Versailles,” he said. He said the school tax hike divided the community, and that while the vote on that matter didn’t go as he hoped, he thought the debate was a good thing. Johnson said while the mayor sets the tone, she criticized a fiery letter to the editor from EDA Chair John Soper, who’s on the city payroll as an economic consultant, that “pitted the wealthy landowners against the peasants. That kind of thing should not occur, especially with someone who’s employed by the city.”

Traugott said he was extremely proud of his record as mayor, despite mistakes early in his tenure. He said he believed there was a lack of understanding about city government that can only be remedied by experience. “The mayor is not a job where you get a map and place developments or housing or shopping centers … it’s not a game of Risk,” he said. He said he was most proud of things many in the public might not be aware of, like adding $2 million to the city’s rainy-day fund and holding spending to less than a 2 percent increase over five years. Other achievements include the recent signing of an executive order starting Angel Program, which is aimed at getting drug abusers into treatment rather than behind bars.

Johnson reiterated her goal of making Versailles a top 10 best town in America. She said she’d knocked on more than 2,100 doors and was most often told, “We love the small-town feel.” She said, “You know what? That’s what we don’t want to lose.” She said she’d also heard “heartfelt” concerns about the need for drug treatment options or recovery support groups that don’t exist in Woodford County. She said she and other members of the Agency for Substance Abuse Prevention are working to fix that problem. She said she was an action-oriented person who’d give 110 percent and employ good governance. “I did that both in my private sector job and as a non-profit director,” she said, and promised to bring those skills to the job as mayor.

Midway Mayor Grayson Vandegrift does not agree with a proposal by EDA member Paul Schreffler at the group’s Oct. 23 meeting that Midway Station might be a good site for multi-family housing. During th